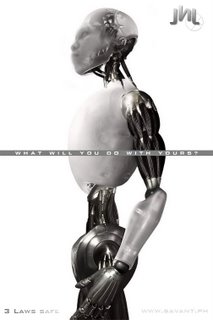 The most powerful robot was recently released by the USR (United States Robotics), it was a new model of NS-5, a faster and more improved one, and perfectly bound to obey the 3 Laws of Robotics, compared to the NS-5 that has some program errors in its system. This new model is known as JHL CR-77 [Jehzeel Hiquiana Laurente Cybernetic Rheostat 2077].

The central positronic brain, V.I.K.I. (Virtual Interactive Kinetic Intelligence), continuously uploads fresh software to each of the JHL CR-77 and has developed an interpretation of the Three Laws which supports the robots running Earth as a benevolent dictatorship, preventing humans from self-harming behavior such as crime or environmental damage.